“Having kid’s will be the most rewarding experience in your life, they say!”

Only your true friends will tell you the truth.  The truth is that having kids feels like one failure after another. You see your own personal flaws amplified in a little person’s body. I don’t know about your family, but my husband and I spend more time claiming that our kids’ bad habits are a result of the other person’s family heritage and not our own.

Why am I bringing this up now, you ask?  Because every once in a while we do something really great as parents.  We make a hard decision that changes our child’s life. If we have the patience to wait it out, then you get to see the benefits – the life-long benefits.  I know I am sounding super dramatic…big shocker for anyone who knows me personally.

Let me tell you a little bit about my oldest son, Nate.  He is super intelligent, many say he is too smart for his own good.  He has severe ADHD, which leads to extreme impulsivity and getting bored of things too quickly.  It is hard for him to see progress in things because he gets bored quickly. He also tends to shy away from things that are too hard for him.  If he does try to do it but then realizes it is a challenge, he will act out in order to distract from the fact that he may not be able to do as well as the others.  He loves sports but has struggled due to breathing problems and lots of health issues that have interfered with helping him develop a strong core. Hand-eye coordination was something that did not come easily to him…six months ago it was pretty non-existent. 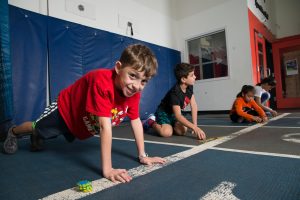 During Black Friday of last year, we decided to join CHHRC.  One of the main reasons for joining was because Nate was obsessed with playing with his IPad twenty-four hours a day.  My husband and I NEEDED to change our family habits ASAP. We did not want this to be forever for Nate. Our sedentary behaviors inspired this love of the couch/Ipad, and my ADHD brain hindered him from breaking away from that.

For the first few months of our membership at CHHRC, Nate went to PKfit several times a week.  It was great because it got him moving and active. The class is an hour-long, so it was long enough to make a difference but short enough that he did not get bored too quickly.  Then he wanted to go farther. He asked to join Parisi Speed School. My husband and I had an evaluation with Coach Lloyd. He explained the pricing and how he could get up to two hours a day, six days a week.  He explained the benefits and then we watched him participate in a trial class. We were willing to do anything we could to help Nate build his athletic skills and his self-esteem. Nate knew he was the slowest and weakest kid on the field…remember he is too smart for his own good.

Six months have passed.  My husband and Nate go to the gym at least 4 times a week.  On Saturdays, Nate will take both classes. He spends two hours working hard!  I have definitely seen a major improvement in day-to-day strength and perseverance skills.  He does not back down from a challenge anymore. When we are outside playing, he no longer has no attention span and insists on going inside for iPad or video games.  He is the first to pack a football or baseball in a bag so he can play with whoever is at the park.

The best part about Parisi, the thing that sets it apart from other specialized training, is that it prepares our kids for every sport.  It builds confidence in all parts of the body and mind. They work on running and strength. Nate is now a competitor in all sports and not just baseball or soccer.  He has confidence. He has built new habits – healthy habits. I am so proud of him. I am so proud of us for making changes that have officially benefited our whole family.

Each month, Parisi does a Leaderboard Challenge to see how much each kid has improved.  Nate’s numbers were incredible. In both the 10 & 20 yard sprints, he has gained over four-tenths of a minute.  He gained FIVE feet on his jump and almost two on his hop. In March, he had an overall evaluation score of 86 points.  This month his evaluation score was 162!!!!! I would not believe it if I was not witnessing all his progress with my own two eyes.  I am a believer in this training program. I am a believer in the ability to change and form new habits. Thank you CHHRC for providing my child with such an incredible opportunity to find his best self.