What happens to our dreams when we wake up in the morning? We remember them for a few minutes, maybe a day or two if we’re lucky, and then they disappear. If we write them down or tell someone about them, we can hold on to them longer.

What happens when we have a crazy dream like running a marathon or decide to start a diet or get back to the gym? We say, “I’ll start on Monday.” But what happens when Monday never comes?

In my last post, I wrote about how we could be limitless together and recounted my running training as I approached the first benchmark race leading up to the half marathon. I was so proud of the work I had put in, even though I had put things off until Monday more times than I cared to admit. But when race day came around, I was feeling strong enough.

I checked in early, took extra time to stretch, and tried to let myself enjoy the atmosphere of the race. I wasn’t nervous at all despite the fact that it was the farthest race I had participated in to date, and involved running over the Ben Franklin Bridge and back. I had run further than six miles plenty of times before, I had cross-trained all summer – this was my day! 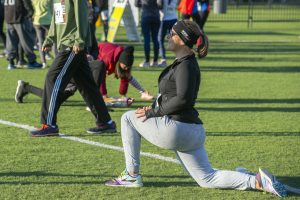 Thank you, race photographer, for capturing the most flattering photo, naturally.

And then the gun went off, and I took one step, and immediately thought – “uh oh.”

The truth is, I had so much already on my plate that week that the race was just a blip on my radar. Physically, I was in peak condition. Mentally, I wasn’t even in the same century as the race.

As I worked my way up the first incline, I couldn’t help but notice the waves of people passing me over and over and over again. I knew I had started in the correct corral, and yet I was falling towards the back of the pack faster than I was making my way over the bridge. Around the two-mile mark I finally felt like I hit a good stride, but then around mile 5, I lost my groove. Thankfully, someone who had been near me most of the race encouraged me to keep going when I was walking just a quarter-mile from the finish line, and my best running buddy Ryan was there at the end cheering for me like a crazy person.

I got my medal, got my free beer, and retreated behind the bleachers to lay down and think about what had just happened. 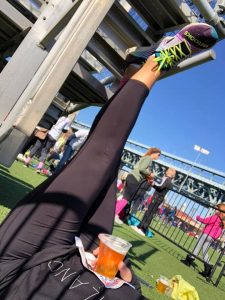 Pondering the meaning of life. 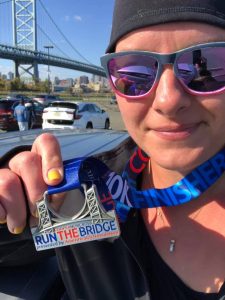 Taking the obligatory medal with bridge in background picture, but clearly not having it and ready to go home and hide for a week or two.

Well, it’s been a month and Monday never came. It’s been a month since one little bad run, and I’m registered for five spring runs – including now TWO half marathons – because instead of getting back on my feet on Monday, I got back on my debit card and tried to make myself feel better by buying new shoes and trying new races even though that’s not going to change what already happened.

But what if I hadn’t put things off until Monday so many times during my training? What if I hadn’t waited for Monday after the race to shake off my pity party? Because – spoiler alert – there have been like FIVE Mondays since that day and yet here I am, still kicking myself a little for one bad day.

The point is, the Mondays are going to come and go. Monday doesn’t wait for you. It moves on. Just like the dreams we have when we sleep, if we don’t work on actively remembering them right away, we lose them. If we want to make a change in our health, it won’t get easier to start on Monday. Once you have that dream, hold on to it and start right away.

Monday doesn’t have to be on Monday.

Monday can be today.

Monday should be today.

If you’re ready for today to be your Monday, CLICK HERE for a free 3-day pass to CHHRC. There’s no day but today to make your dreams a reality.