No Human is Limited

No Human is Limited

Dear Mr. Obama, Thank you for your special words. In life we hope to inspire others. Thank you for inspiring me. It would be my greatest honour if we could meet, and discuss how we can make this world a running world. As a running world is a peaceful world. #NoHumanIsLimited https://t.co/RTe2Sf7MwZ

Before I went to bed Friday evening, I made a mental note to check Kipchoge’s time as soon as I woke up. I went on to have a dream about him literally throwing himself over the finish line at 1:59:59, laying on the ground asking if he did it. I was glad to see that didn’t come to fruition and he was able to finish on his feet with plenty of time to spare. I wondered to myself how far I could run in 1:59:41 – according to my most recent official finish time, the answer is barely 11. At an 11 minute mile pace, I could conceivably run 10.88 miles in one hour 59 minutes and 41 seconds. Kipchoge ran 26.2 miles.

Just two days later, female runner Brigid Kosgei broke her own world record and ran the Chicago Marathon in two hours 13 minutes. While she was breaking records, I was running the Gritty 5K after three weeks of virtually no activity and questioning my life choices every step of the way. From running with 3,000 people dressed up as Philadelphia Flyers Icon Gritty, to coming off my own marathon of nearly a month long sedentary, binge eating, not-so-excellent mental health days, running three miles seemed like a disaster waiting to happen.

When I signed up for the upcoming Love Run Half Marathon, I panicked and went into over-training overdrive. I burnt out early. It didn’t matter that I had two more runs between the day I signed up and actually running the half – mentally I was done. The only thing I can chalk my successful 5k results up to is the time I put in at CHHRC and the constant support from trainers like Kelly H, in-house TheraSport Physical Therapist Dr. Steve, instructor and Membership Coordinator Christine, and Marketing Director Lisa. Along with a small but strong community of running friends, my therapist, and my family, being a member of CHHRC is one of the best things I have ever done for myself to finish building team around me to reach my goals. Whether it’s having Kelly check in on my weekly exercise and dietary plans, have Lisa check in on my mental status, swapping race day stories with Christine, and the reassurance from Dr. Steve that I can always pop into his office for a quick tune-up, I know that when I do have a bad day – or week, or month – I can come to any one of them to help snap me out of it, or ask for the hand holding to get me through it until I’m ready to make a comeback. 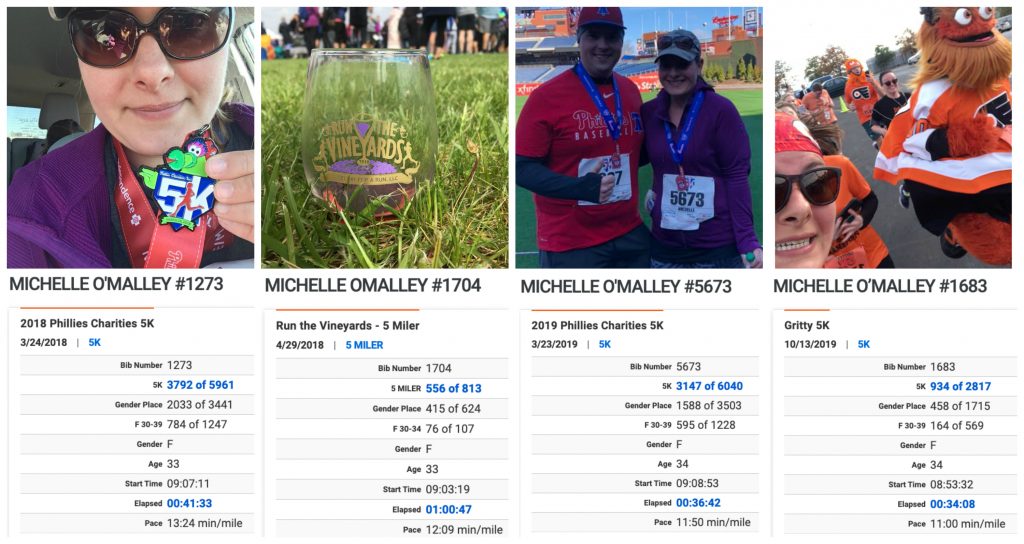 I started running in October of 2017 using the Couch to 5K program with a goal of completing the 2018 Phillies 5K. I was sidelined with running injuries after the 5-mile race in April 2018, and it wasn’t until January of 2019 that I returned to the gym and added cross training back into my regimen. I am not a running coach, and I am not a fitness guru or licensed such and such by any means, but I feel like I can say with complete confidence that my pace would not have continued to dip from April of 2018 to March of 2019 had it not been for GroupEx (you may know by now that my favorite classes are MOSSA Group Power and Summit Cycle) and the CHHRC staff. Had I not been so diligent about intentionally mixing up my fitness routine, I would not have been remotely prepared for this weekend’s 5K, despite feeling woefully underprepared in the moment. A year ago, had I tried to run three miles after a month of self destructive thinking and behavior, I would have absolutely stopped for a hot dog at one of the many distraction stations set up along the route rather than pushing through for a strong finish with Gritty by my side. 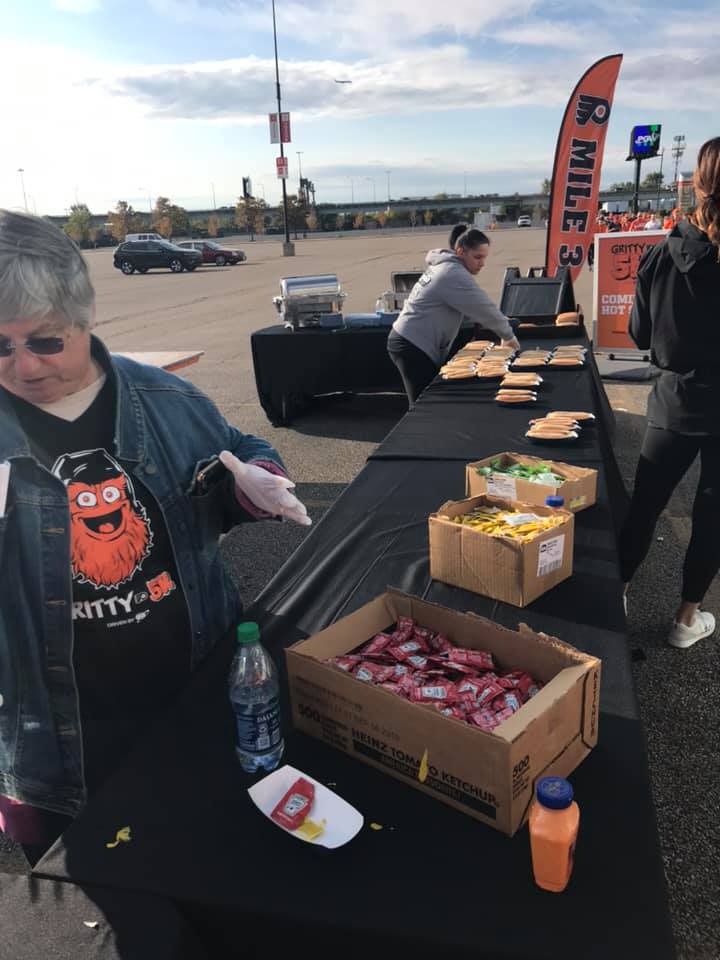 The mile 3 hot dog table being set up – I immediately regretted not stopping for one.

If you want to start building your team, or even if you just need someone next to you on the treadmill while you break yourself back into a routine, click here for a free 3-day pass to CHHRC, and let me know what time to meet you there. We can be limitless together.